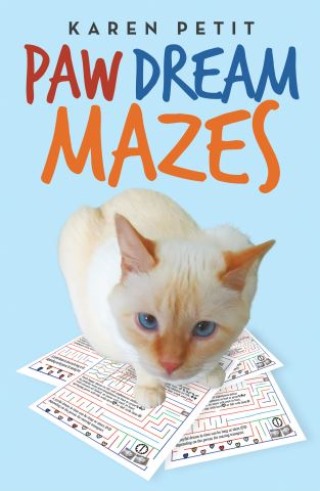 One of the poems in PAW DREAM MAZES, “A Trasher Trashed,” has a kitten that was trashed and is dreaming a nightmare. This part of her dream is directly connected to her reality:

The person who often did trash his cats

had placed his face next to three thrashing rats,

opened his mouth to scrunch his metal-like teeth,

and scared the rats that were above and beneath.

All the poems in PAW DREAM MAZES have dream/reality connections, animal content, rhymes, rhythms, alliteration, and metaphors. The dreamers include animals, people, and aliens from outer space. A few poems in this book reference COVID-19 experiences.

PAW DREAM MAZES has sonnets, two prayer poems, narrative poems with a lot of action, ten pictures, and twenty-four mazes with content from five maze poems: “Mazes in Dreams,” “Dreams of Rescue,” “Cat Grammar,” “A Hungry Mouse in a Dream Maze,” and “Polydactyl Reality and Dreams.”

Connections to our history are referenced in several poems: “Two Mayflower Dogs,” “A Banished Dog,” and “President Abraham Lincoln’s Pets.”

Three poems have sci-fi content. “Tigurrrs of Space” has multiple alien tigurrrs that all love their own space and kidnap one of Earth’s tigers from a zoo. “Alien Bears in Pairs” has alien bears that interact with campers, police officers, a bear, and a dog. “Pawsing Time and Space” has aliens who visit the minds of dreaming animals and a senator on Earth.

Dr. Karen Petit (www.drkarenpetit.com) has written three books of poetry and four novels. She received her doctorate in English from the University of Rhode Island and an award in poetry from the Academy of American Poets. For more than thirteen years, Petit has been an adjunct faculty member and the Writing Center Coordinator at the Community College of Rhode Island.