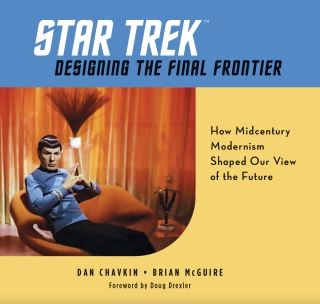 How Midcentury Modernism Shaped Our View of the Future

Star Trek: The Original Series (1966-1969) was the first installment of one of the most successful and longest-running television franchises of all time. Today, Trek fans champion its writing, progressive social consciousness, and aesthetic. Designing the Final Frontier is a unique, expert look at the mid-century modern design that created and inspired that aesthetic. From Burke chairs to amorphous sculptures, from bright colors to futuristic frames, Star Trek TOS is bursting with mid-century modern furniture, art, and design elements—many of them bought directly from famous design showrooms. Together, midcentury modern design experts Dan Chavkin and Brian McGuire have created an insider’s guide to the interior of original starship Enterprise and beyond, that is sure to attract Star Trek’s thriving global fan base.

Dan Chavkin: DAN CHAVKIN began his photographic career in 1992, studying at the prestigious school Art Center College of Design in Pasadena, California. Upon graduating, he moved to New York City to work as a professional photographer, shooting celebrity portraiture for various top magazines. An avid aficionado of all things modernist, Dan began collecting midcentury modern furniture, and vintage film posters, book covers, and periodicals as a way of feeding his passion for modernism. Dan lives and works in Palm Springs, California.|||