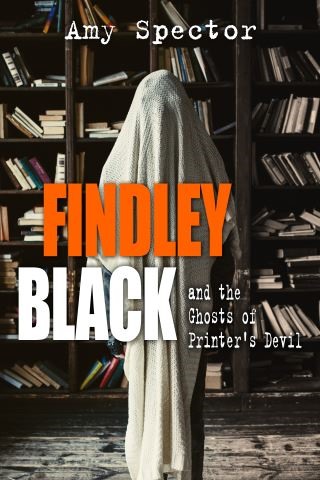 Findley Black and the Ghosts of Printer's Devil

Starting over at thirty-four is harder than Owen Key expected. Lonelier too. There’s Bella, and the odd assortment of kids he’d inherited when a father he barely knew left him Printer’s Devil. But his bookstore employees and his cat aren’t much good when it comes to getting laid.

Findley Black says a lot of things. At least according to everyone at the store. When Owen runs into him for the first time during one of his ghost tours, with his leather jacket and flirtatious looks, Owen finds himself more than interested in what he has to say.

Owen may have been hoping for a one-night-stand, but when Findley asks to stay the remainder of Halloween night in the Printer’s Devil in hopes of seeing the ghost of a serial killer, he finds it hard to say no.

Halloween is a time for ghost stories and trick or treat. But running out of candy is a bad omen, and it’s hard to get lucky when something otherworldly seems determined to ruin your night.