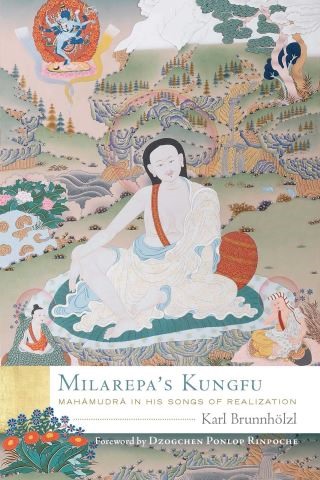 Mahamudra in His Songs of Realization

Lion's Roar says, "This book is a treasure of subtle revelation."

This is the first stanza of Milarepa’s Ultimate View, Meditation, Conduct, and Fruition: pith instructions originally sang to the great yogi Rechungpa, Milarepa’s disciple. These teachings are Milarepa’s direct offering to his disciple of his own profound realization, gained after many years of dedicated practice. Karl Brunnhölzl, acclaimed translator and senior teacher at the Nalandabodhi community of Dzogchen Ponlop Rinpoche, calls this hard-earned understanding “kungfu”: “Gong means ‘skillful work,’ ‘hard training,’ or ‘endeavor,’ and fu means ‘time spent...’ The term refers to Milarepa’s diligent and skillful training in the techniques to realize the nature of his mind and benefit countless sentient beings.”

Ultimate View, Meditation, Conduct, and Fruition is a work of remarkable depth and clarity. In just five verses, Milarepa gives incisive instructions for progressing and for avoiding pitfalls in the stages of practice:

- View: the basis or ground from which the proper meditation, conduct, and fruition of mahamudra can arise

- Meditation: the training in or the familiarization with that view

- Conduct: the natural outflow of having familiarized with the view in meditation

- Fruition: the final outcome of having fully assimilated and realized the view, whose essence is not different from it

Karl Brunnhölzl: Karl Brunnhölzl, MD, PhD, was originally trained as a physician. He received his systematic training in Tibetan language and Buddhist philosophy and practice at the Marpa Institute for Translators, founded by Khenpo Tsultrim Gyamtso Rinpoche, as well as the Nitartha Institute, founded by Dzogchen Ponlop Rinpoche. Since 1989 he has been a translator and interpreter from Tibetan and English. Karlis is a senior teacher and translator in the Nalandabodhi community of Dzogchen Ponlop Rinpoche, as well as at the Nitartha Institute. He lives in Munich and is the author and translator of numerous texts, including A Lullaby to Awaken the Heart: The Aspiration Prayer of Samantabhadra and Its Tibetan Commentaries and Luminous Melodies: Essential Dohas of Indian Mahamudra.