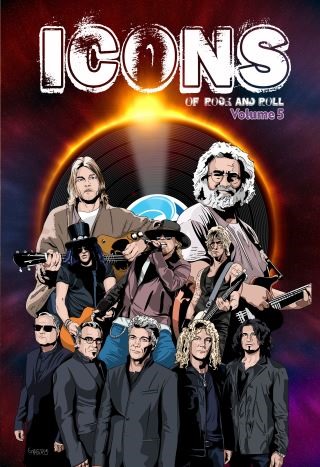 A brand new biographical graphic novel featuring the best of music. A brilliant artist taken from us too soon, counterculture and non-conformist icon Jerome John "Jerry" Garcia was a musician best known for his distinctive guitar playing and thirty-three-year history with the Grateful Dead. The voice of a generation, the "most dangerous band in the world, "Guns N’ Roses rode the wave of fame and fortune during the heyday of MTV. Camera-ready, their creativity fueled by drugs, booze, and eager groupies, members like Axl Rose and Slash crafted music permeated the airwaves. New Jersey's favorite son, Jon Bon Jovi, and his band, Bon Jovi, survived three decades of trial and turbulence. Their classic rags to riches story inspired generations. Kurt Cobain Music lives on to this day. The Nirvana frontman was tortured by success and struggled with an addiction to drugs before his death at the age of 27. His voice, however, remains. Read about the meteoric rise and fall of the icons of rock in the pages of this new graphic novel collection.