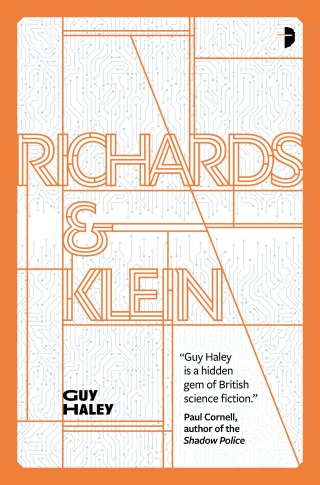 Richards and Klein are a 22nd century Holmes and Watson...except Richards is a highly advanced AI and Klein is a German ex-military cyborg.

Together, they must journey through the Great Firewall of China into the renegade digital realm of Reality 36, in search of a missing AI rights activist. But what they find will threaten their entire world.

K52 is an AI with a diabolical plan: to create an artificial reality of the entire universe, and learn to control the real universe in turn. And only Richards and Klein can stop it.

Guy Haley: Guy Haley is the author of over thirty novels and novellas - he’s lost count of the actual number - and so many short stories he never bothered counting in the first place. A prominent member of the Black Library’s Warhammer fiction writing team, he has contributed multiple novels and tales to the millions-selling Horus Heresy series, is one of the writers on the highly anticipated Siege of Terra, and is lead writer on the epic Dawn of Fire.


His original fiction includes Crash, Champion of Mars, and the Emperor’s Railroad. He is the author of the Gates of the World fantasy series under the name KM McKinley, and was for many years an editor and journalist for SFX, Death Ray, and White Dwarf magazines. He lives in his native Yorkshire with his wife, son and a Malamute called Maximus.