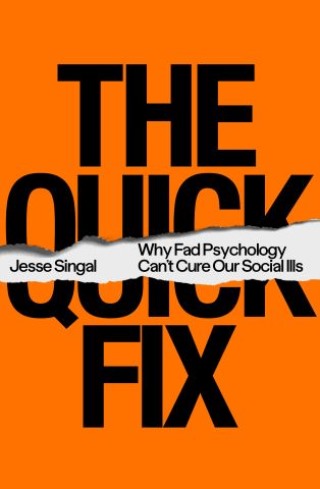 An investigative journalist exposes the many holes in today’s bestselling behavioral science, and argues that the trendy, TED-Talk-friendly psychological interventions that are so in vogue at the moment will never be enough to truly address social injustice and inequality.

With their viral TED talks, bestselling books, and counter-intuitive remedies for complicated problems, psychologists and other social scientists have become the reigning thinkers of our time. Grit and “power posing” promised to help overcome entrenched inequalities in schools and the workplace; the Army spent hundreds of millions of dollars on a positive psychology intervention geared at preventing PTSD in its combat soldiers; and the implicit association test swept the nation on the strength of the claim that it can reveal unconscious biases and reduce racism in police departments and human resources departments.

But what if much of the science underlying these blockbuster ideas is dubious or fallacious? What if Americans’ longstanding preference for simplistic self-help platitudes is exerting a pernicious influence on the way behavioral science is communicated and even funded, leading respected academics and the media astray?

In The Quick Fix, Jesse Singal examines the most influential ideas of recent decades and the shaky science that supports them. He begins with the California legislator who introduced self-esteem into classrooms around the country in the 1980s and the Princeton political scientist who warned of an epidemic of youthful “superpredators” in the 1990s. In both cases, a much-touted idea had little basis in reality, but had a massive impact. Turning toward the explosive popularity of 21st-century social psychology, Singal examines the misleading appeal of entertaining lab results and critiques the idea that subtle unconscious cues shape our behavior. As he shows, today’s popular behavioral science emphasizes repairing, improving, and optimizing individuals rather than truly understanding and confronting the larger structural forces that drive social ills.

Like Anand Giridharadas’s Winners Take All, The Quick Fix is a fresh and powerful indictment of the thought leaders and influencers who cut corners as they sell the public half-baked solutions to problems that deserve more serious treatment.

Jesse Singal: Jesse Singal is a contributing writer at New York and the former editor of the magazine’s Science of Us online vertical, as well as the cohost of the podcast Blocked and Reported. His work has appeared in The New York Times, The Atlantic, The Chronicle of Higher Education, Slate, The Daily Beast, The Boston Globe, and other publications. He is a former Robert Bosch Foundation fellow in Berlin and holds a master’s degree from Princeton University’s School of Public and International Affairs.