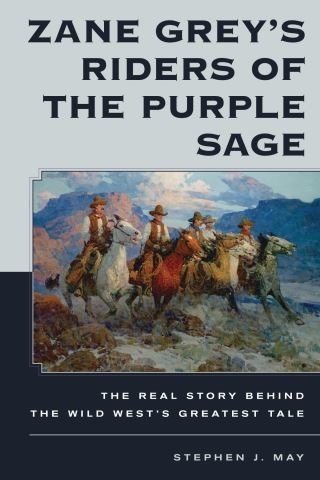 The Real Story Behind the Wild West’s Greatest Tale

His mother was against it, but he grew up to be a cowboy anyway. Zane Grey was a corn-fed mid-westerner who ended up an unhappy dentist in New York City. After a journey to Arizona and Utah in 1907, he decided he would rather wear chaps and a Stetson than return to a mundane life pulling teeth in Manhattan.

Thus began his career as a writer. Zane Grey faced mountains of rejection and disappointment in publishing his early novels, but when Riders of the Purple Sage was published in 1912, and it set in motion the entire Western genre in books, movies, and eventually country western music. It was and remains an epic, colorful novel, filled with action, romance, and vivid descriptions of the Old West. Drawing on his letters, diaries, and personal papers, the story of his growth as a writer and of the creation of this book is a rags-to-riches saga sure to appeal to writers of any age, history buffs, motion picture fans, and lovers of music. Plus, it is a story set against the grandeur and sublimity of the American West.

Stephen J. May: Stephen J. May grew up in southern California, attended college and university at California State University at Los Angeles, graduating summa cum laude, and earning an M.A. in comparative literature and history. His PhD was earned at International University, London, UK. He taught at the college level for twenty years, earning several teaching honors. And he has traveled and written extensively, both in the West and abroad. In 2002 he wrote the definitive biography of Pulitzer Prize winner James A. Michener (University of Oklahoma Press) whose papers were archived at the University of Northern Colorado, where he was teaching at the time. His two previous biographies of Zane Grey focused on different aspects of his life, but in this new book he investigates the background of Riders of the Purple Sage--one book which has defined and invigorated the Western era from 1912 to the present day.