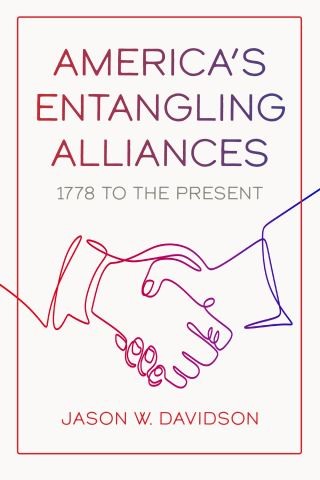 A challenge to long-held assumptions about the costs and benefits of America’s allies.

Since the Revolutionary War, the United States has entered into dozens of alliances with international powers to protect its assets and advance its security interests. America’s Entangling Alliances offers a corrective to long-held assumptions about US foreign policy and is relevant to current public and academic debates about the costs and benefits of America’s allies.

Author Jason W. Davidson examines these alliances to shed light on their nature and what they reveal about the evolution of American power. He challenges the belief that the nation resists international alliances, showing that this has been true in practice only when using a narrow definition of alliance. While there have been more alliances since World War II than before it, US presidents and Congress have viewed it in the country’s best interest to enter into a variety of security arrangements over virtually the entire course of the country’s history. By documenting thirty-four alliances—categorized as defense pacts, military coalitions, or security partnerships—Davidson finds that the US demand for allies is best explained by looking at variance in its relative power and the threats it has faced.

Jason W. Davidson is a professor of political science and international affairs at the University of Mary Washington. He is the author of America’s Allies and War: Kosovo, Afghanistan, and Iraq, The Origins of Revisionist and Status-Quo States, and, with Fabrizio Coticchia, Italian Foreign Policy during Matteo Renzi’s Government: A Domestically-Focused Outsider and the World.