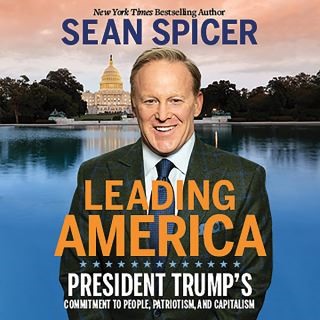 The former White House Press Secretary and Communications Director analyzes our current political moment through the lens of politics and culture and argues that President Trump has put the country back on the right track and needs to be reelected in 2020.
When it was announced that Sean Spicer would be the newest guest on ABC's Dancing with the Stars, he was promptly attacked by countless liberal media institutions. Apparently, they'd rather see him crawl under a rock forever than have a little fun on television (while raising money for charity). And that was only a small example. All over the country, liberals are attacking conservatives with the kind of fervor once reserved for hardened criminals. It's a zero sum game -- either you're with them one hundred percent, or you're the enemy. Whether you're in politics, media, academia, or entertainment, it's the same story.
As one of the few people who's played a small part in all of those worlds, Sean Spicer has a unique perspective on the methods used by the left to shut down conservative voices. He's been parodied on SNL, ripped apart on the nightly news, and protested on college campuses, all for doing his job. Outside of the left's bubble, however, he's been able to transition from politics to entertainment very well, and he's got huge numbers of supporters.
In Leading America, he writes about all the ways President Trump has fought back against the Left, and examines all the ways conservatives can take a stand to uphold their rights and values.

Sean Spicer: Sean Spicer has served as White House press secretary and communications director as well as Republican National Committee communications director and chief strategist. He also worked for the United States Trade Representative and several members of Congress. A graduate of the Portsmouth Abbey School in Rhode Island, Connecticut College, and the United States Naval War College, he is a commander in the United States Navy Reserve. Spicer is also the founder and president of Rigwil, LLC, a strategic consulting firm for corporate and association executives. A frequent public speaker and commentator, he lives with his family in Alexandria, Virginia.