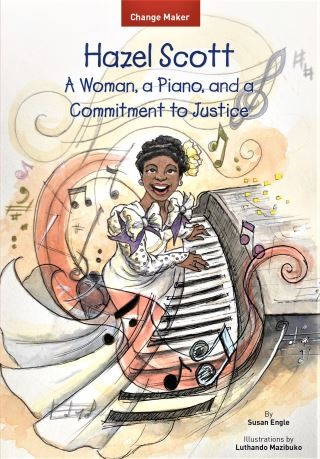 A Woman, a Piano and a Commitment to Justice

Hazel Scott was a champion for civil and women's rights. Born in Trinidad in 1920, she moved with her family to the United States in 1924. She was a musical wonder--studying and performing on the piano from the time she was a child. She became an accomplished singer as well, and appeared in Broadway musicals, films, and recorded her own albums. She also made headlines by standing up for the rights of women and African Americans, and she refused to play for segregated audiences. When Dr. Martin Luther King, Jr. led the March on Washington, Hazel led a march in Paris, where she was living, in front of the American Embassy. She learned about the Bahá'í Faith from Dizzy Gillespie and became a Bahá'í on December 1, 1968. She passed away in 1981.

We invite you to learn more about this "Change Maker" and the enduring impact she had on race relations through her performing arts.

Susan Engle is the author of several award-winning titles in the Change Maker Series from Bellwood Press, including Robert Sengstacke Abbott: A Man, a Paper, and a Parade, John Birks "Dizzy" Gillespie: A Man, a Trumpet, and a Journey to Bebop, and Hazel Scott: A Woman, a Piano anda Commitment to Justice.

She earned a BFA in Theater Arts from Denison University in 1972--which included an apprenticeship at the Metropolitan Opera in New York City--and began to work as a stage manager for the New Mexico Symphony Orchestra the following year. After her twin daughters were born in 1973, Susan began writing songs and poems for children. In partnership with friends and family, she published more than seventy over the years, including several award-winning music CDs such as Come and Sing and Loving Hands that were written especially for children and families.