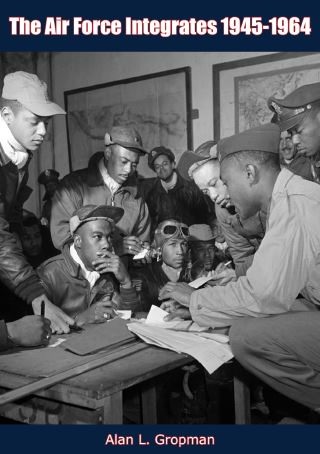 FROM THE FOREWORD: This book describes the struggle to desegregate the post-World War II U.S. Army Air Forces and its successor, the U.S. Air Force, and the remarkable advances made during the next two decades to end racial segregation and move towards equality of treatment of African-American airmen. The author, Lt. Col. Alan L. Gropman, a former Instructor of History at the U.S. Air Force Academy, received his doctorate degree from Tufts University. His dissertation served as the basis for this volume. In it, the author describes the fight to end segregation with the Air Force following President Harry S. Truman’s issuance of an executive order directing the integration of the armed forces. Despite resistance to the order, fueled by heated segregationist opposition, integration moved ahead somewhat slowly under the administration of President Dwight D. Eisenhower. Progress increased during the administration of President John F. Kennedy, which saw major advances toward achieving equality for African-American servicemen. Colonel Gropman’s study is a detailed, comprehensive, and in many respects, a documentary account. The crucial events it describes more than justify the unusually extended treatment they receive. The volume thus provides a permanent record of this turbulent period in race relations and constitutes a significant contribution to the history of the Air Force.