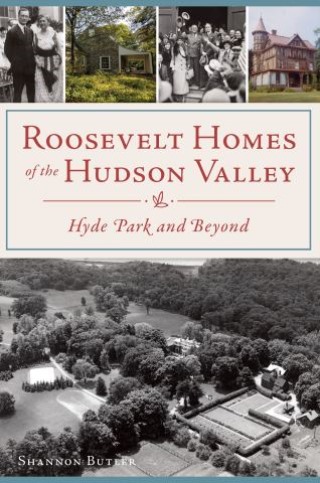 Roosevelt Homes of the Hudson Valley

Hyde Park and Beyond

Franklin Delano Roosevelt and his family may be most remembered for their time at 1600 Pennsylvania Avenue, but it was the Hudson Valley they called home. In Manhattan, the president's mother built a townhome on East Sixty-Fifth Street, and Eleanor was born on East Thirty-Seventh. On the banks of the Hudson River, Hyde Park was Franklin's birthplace and where he entertained some of the most important leaders of the twentieth century. Up the Albany Post Road, several homes of family and friends played important moments in history. Laura Delano's Tudor-style house was where FDR met with Churchill, and the beautiful Wilderstein was home to Daisy Suckley, a devoted confidante. In Albany as governor, FDR installed a therapy pool in a converted outdoor greenhouse to assist his physical challenges in the Executive Mansion. Historian Shannon Butler traces the historic homes that shaped the Roosevelt family in the Hudson Valley.

Shannon Butler: Shannon Butler was born in Poughkeepsie and educated at local schools and universities. She began her career in museums by working at the Senate House State Historic Site in Kingston, New York. While there, she decided to go to college to pursue her passion for history, first attending SUNY-Ulster, followed by SUNY-New Paltz and finally earning her master's in history from SUNY-Albany. She worked with the National Park Service at Roosevelt-Vanderbilt National Historic sites for eight years, where she found her interest in Roosevelt history. In 2018, she became the town historian of the Town of Hyde Park and a year later was also made the historian of the Poughkeepsie Public Library. She is the coauthor of Hyde Park in the Gilded Age, and this is her first solo work.