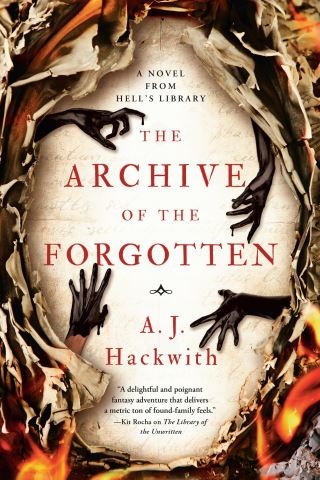 The Archive of the Forgotten

In the second installment of this richly imagined fantasy adventure series, a new threat from within the Library could destroy those who depend upon it the most.

The Library of the Unwritten in Hell was saved from total devastation, but hundreds of potential books were destroyed. Former librarian Claire and Brevity the muse feel the loss of those stories, and are trying to adjust to their new roles within the Arcane Wing and Library, respectively. But when the remains of those books begin to leak a strange ink, Claire realizes that the Library has kept secrets from Hell--and from its own librarians.

Claire and Brevity are immediately at odds in their approach to the ink, and the potential power that it represents has not gone unnoticed. When a representative from the Muses Corps arrives at the Library to advise Brevity, the angel Rami and the erstwhile Hero hunt for answers in other realms. The true nature of the ink could fundamentally alter the afterlife for good or ill, but it entirely depends on who is left to hold the pen.

A. J. Hackwith: A. J. Hackwith is (almost) certainly not an ink witch in a hoodie. She's a queer writer of fantasy and science fiction living in Seattle, and writes sci-fi romance as Ada Harper. She is a graduate of the Viable Paradise writer's workshop and her work appears in Uncanny magazine and assorted anthologies. Summon A.J. at your own peril with an arcane circle of fountain pens and classic RPGs, or you can find her on Twitter and other dark corners of the Internet.