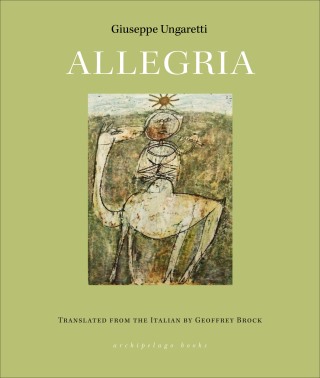 Geoffrey Brock, whose translations have won him Poetry magazine's John Frederick Nims Memorial Prize and a Guggenheim Fellowship, finally does justice to these slim, concentrated verses in his English translation, alongside Ungaretti's Italian originals.

Famed for his brevity, Giuseppe Ungaretti's early poems swing nimbly from the coarse matter of tram wires, alleyways, quails in bushes, and hotel landladies to the mystic shiver of pure abstraction. These are the kinds of poems that, through their numinous clarity and shifting intimations, can make a poetry-lover of the most stone-faced non-believer. Ungaretti won multiple prizes for his poetry, including the 1970 Neustadt International Prize for Literature. He was a major proponent of the Hermetic style, which proposed a poetry in which the sounds of words were of equal import to their meanings. This auditory awareness echoes through Brock's hair-raising translations, where a man holding vigil with his dead, open-mouthed comrade, says, "I have never felt / so fastened / to life."

Giuseppe Ungaretti: Giuseppe Ungaretti (1888-1970) was born in Alexandria to Italian settlers--his father was a laborer working on the Suez Canal and his mother ran a bakery. Ungaretti left for Paris to study at the Sorbonne, where he befriended Guillaume Apollinaire, Paul Valéry, Picasso, Braque, and Léger. Ungaretti wrote his first book of poetry while serving in the Italian Army in World War I. From 1936 until 1942, he taught Italian literature at the University of São Paulo in Brazil. After the death of his nine-year-old son, Ungaretti published a collection of poems, Il dalore, which expressed both tragic personal loss and horror at the atrocities of Nazi Germany. Ungaretti translated Shakespeare, William Blake, and Racine into Italian, among others. He died in Milan in 1970. About the translator: Geoffrey Brock was born in Atlanta and holds an MFA from the University of Florida and a PhD from UPenn. He has won multiple prizes for his original poetry, including the New Criterion Poetry Prize. For his translations, which include work by Cesare Pavese and Umberto Eco, Brock has won Poetry magazine's John Frederick Nims Memorial Prize, a Guggenheim Fellowship, the MLA's Lois Roth Translation Award, and the PEN Center USA award for translation.