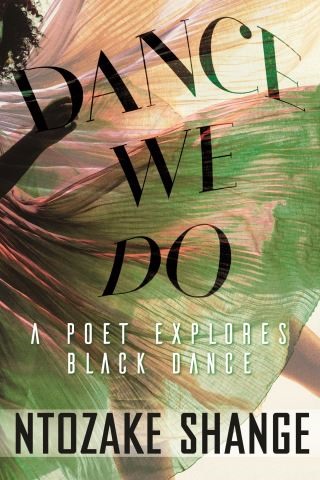 In her first posthumous work, the revered poet crafts a personal history of Black dance and captures the careers of legendary dancers along with her own rhythmic beginnings.

Many learned of Ntozake Shange’s ability to blend movement with words when her acclaimed choreopoem for colored girls who have considered suicide/when the rainbow is enuf made its way to Broadway in 1976, eventually winning an Obie Award the following year. But before she found fame as a writer, poet, performer, dancer, and storyteller, she was an untrained student who found her footing in others’ classrooms. Dance We Do is a tribute to those who taught her and her passion for rhythm, movement, and dance.

After 20 years of research, writing, and devotion, Ntozake Shange tells her history of Black dance through a series of portraits of the dancers who trained her, moved with her, and inspired her to share the power of the Black body with her audience. Shange celebrates and honors the contributions of the often unrecognized pioneers who continued the path Katherine Dunham paved through the twentieth century. Dance We Do features a stunning photo insert along with personal interviews with Mickey Davidson, Halifu Osumare, Camille Brown, and Dianne McIntyre. In what is now one of her final works, Ntozake Shange welcomes the reader into the world she loved best.

Ntozake Shange: Ntozake Shange (1948–2018) was a renowned poet, novelist, playwright, and performer, best known for her Broadway-produced and Obie Award–winning choreopoem for colored girls who have considered suicide/when the rainbow is enuf. She wrote numerous works of fiction, poetry, and nonfiction, including If I Can Cook/You Know God Can, Wild Beauty, and Sassafras.

Alexis Pauline Gumbs (Foreword) is the literary advisor to the Ntozake Shange Revocable Trust. She is the author of M Archive: After the End of the World and Spill: Scenes of Black Feminist Fugitivity and is the co-editor of Revolutionary Mothering: Love on the Front Lines. She is the founder of Brilliance Remastered, an organization that supports underrepresented scholars, artists, and organizers. Alexis has received numerous awards and recognitions such as the Advocate Magazine’s 40 under 40 and Colorlines’s 10 LGBTQ Leaders Transforming the South. Connect with her at alexispauline.com..

Reneé L. Charlow (Afterword) was the personal assistant to Ntozake Shange from 2014 to 2018. She is an actor, director, writer, and Theatre professor. She served as associate producer and assistant director for the production of Shange’s Lost in Language and Sound at Karamu House, Cleveland, OH, and directed for colored girls who have considered suicide when the rainbow is enuf at Virginia Commonwealth University and Bowie State University. Keep in touch with Renee at mycreativespirit.net.