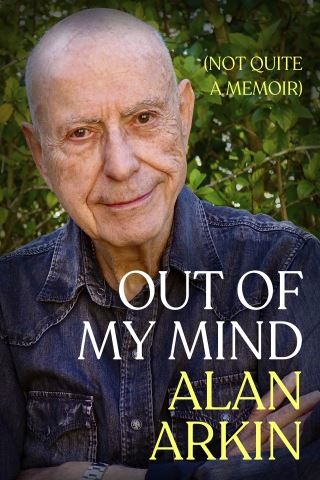 Out of My Mind

(Not Quite a Memoir)

Alan Arkin, one of the most beloved and accomplished actors of our time, reveals a side of himself not often shown on stage or screen.

Like many teenagers, 16-year-old Alan Arkin had it all figured out. Then came young adulthood, and with it a wave of doubt so strong it caused him to question everything he thought he knew about himself and the world. Ever skeptical and full of questions, Arkin embarked on a spiritual journey to find something—anything—to believe in. An existential crisis in his 30s led him to the study of Eastern philosophy. Soon he began opening himself to the possibility that there was more to life than what he had simply seen, heard, or been taught.

In this "mini-memoir," the 84-year-old actor shares his powerful spiritual experiences, from his brush with reincarnation to the benefits of meditation. In a gruff, earthy voice that sounds more suited to a New York cabbie than a spiritual guide, he shows us that wisdom can come from the most unexpected places and teachers. Out of My Mind is a candid, relatable, and delightfully irreverent take on how one man went searching for meaning and ended up discovering himself.

Alan Arkin: Alan Arkin has starred on Broadway, TV, over sixty films, and has won almost every acting award in North America. In this, his ninth published book, with his characteristic wry humor, he digs into his long time search for meaning past the seductive glamour of show business. By the time he was in his early thirties, his career was in full bloom and he had achieved everything he’d ever thought he wanted, only to find that it was not what he had hoped for. Something was missing, himself. In Out of My Mind, Arkin speaks openly about the existential crisis which brought him from analysis to the serious study of Eastern Philosophy and several teachers who helped him revise his views on almost everything. In this sort-of-memoir, the eighty-six year-old actor tells of the adventures, which, as a direct result of decades of meditation, shook his conception of reality and brought him to a new, exciting, and expanded view of what is out there, and the endless, mind-boggling adventure into what is possible–not just for himself but for all the rest of us.