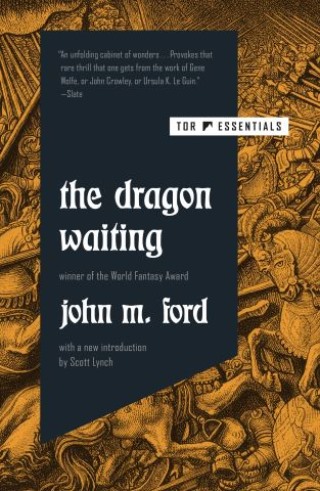 “The best mingling of history with historical magic that I have ever seen.”—Gene Wolfe

In a snowbound inn high in the Alps, four people meet who will alter fate.

And Sforza, the uncanny duke.

Together they will wage an intrigue-filled campaign against the might of Byzantium to secure the English throne for Richard, Duke of Gloucester—and make him Richard III. Available for the first time in nearly two decades, with a new introduction by New York Times-bestselling author Scott Lynch, The Dragon Waiting is a masterpiece of blood and magic.

“Had [John M. Ford] taken The Dragon Waiting and written a sequence of five books based in that world, with that power, he would’ve been George R.R. Martin.” —Neil Gaiman

John M. Ford: John M. Ford (1957-2006) was a science fiction and fantasy writer, game designer, and poet whose work was held in high regard by peers ranging from Neil Gaiman to Robert Jordan to Jo Walton to Roger Zelazny, alongside innumerable others. His novels include the World Fantasy Award-winning The Dragon Waiting, the Philip K. Dick Award-winning Growing up Weightless, and the contemporary thriller The Scholars of Night. His debut novel Web of Angels (1980) has been called “cyberpunk before there was cyberpunk.” He spent the latter decade-and-a-half of his writing life in Minneapolis, Minnesota.