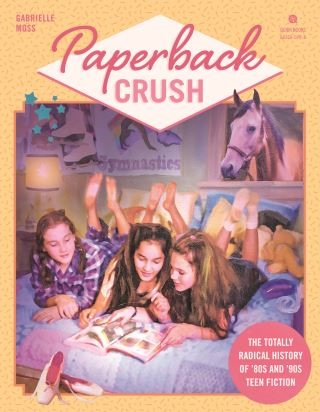 The Totally Radical History of '80s and '90s Teen Fiction

For fans of vintage YA, a humorous and in-depth history of beloved teen literature from the 1980s and 1990s, full of trivia and pop culture fun.

Those pink covers. That flimsy paper. The nonstop series installments that hooked readers throughout their entire adolescence. These were not the serious-issue novels of the 1970s, nor the blockbuster YA trilogies that arrived in the 2000s. Nestled in between were the girl-centric teen books of the ’80s and ’90s—short, cheap, and utterly adored.

In Paperback Crush, author Gabrielle Moss explores the history of this genre with affection and humor, highlighting the best-known series along with their many diverse knockoffs. From friendship clubs and school newspapers to pesky siblings and glamorous beauty queens, these stories feature girl protagonists in all their glory. Journey back to your younger days, a time of girl power nourished by sustained silent reading. Let Paperback Crush lead you on a visual tour of nostalgia-inducing book covers from the library stacks of the past.

Gabrielle Moss: Gabrielle Moss is the author of GLOP: Nontoxic, Expensive Ideas That Will Make You Look Ridiculous and Feel Pretentious (HarperCollins, 2016). She is a features editor at Bustle and her work has appeared in the New Yorker, Slate, GQ.com, the Hairpin, and many other fine publications. She lives in New York City. She is definitely a Jessica. Follow her on Twitter @Gaby_Moss.