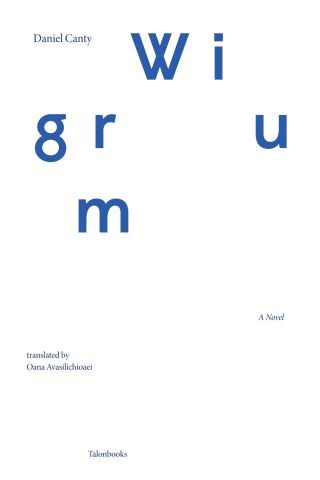 It’s October 1944. During a brief respite from the aerial bombardment of London, Sebastian Wigrum absconds from his small flat and disappears into the fog for a walk in the Unreal City. This is our first and only encounter with the enigmatic man we come to discover decades later through more than one hundred everyday objects he has left behind. Wigrum’s bequest is a meticulously catalogued collection of the profoundly ordinary: a camera, some loose teeth, candies and keys, soap, bits of string, hazelnuts, and a handkerchief. Moving through the inventory artifact to artifact, story to story, we become immersed in a dreamlike narrative bricolage determined as much by the objects’ museological presentation as by the tender and idiosyncratic mania of Wigrum’s impulse to collect them.

With its traces of Jorge Luis Borges, Italo Calvino, and Georges Perec, Daniel Canty’s graphically arresting Wigrum explores the limits of the postmodern novel. Having absorbed the logic of lists and the principles of classification systems, the Wigrumian narrative teeters on the boundary between fact and fiction, on the uncertain edge of the real and the unreal.

Readers venturing into Sebastian Wigrum’s cabinet of curiosities must abide only the following maxim: If I can believe all the stories I am told, so can you.

Daniel Canty:
Daniel Canty is a writer and film director living in Montreal who works in literature, film, and new media.

From 1996 to 1999, Canty was part of Vancouver’s pioneering multimedia studio DNA Media, where he wrote the documentary Masks: Faces of the Pacific (1998) and directed the interactive adaptation of Alan Lightman’s novel Einstein’s Dreams (1999). He went on to create the framework and direct inaugural issues of Horizon Zero (2001), the Banff New Media Institute’s webspace on the digital arts in Canada. In the following years, he wrote, acted as a consultant, or directed numerous art-based or culture-related interactive projects.

Canty’s first book, Êtres Artificiels (Liber, 1997), is a history of automata in American literature. From 2002 to 2005, he co-directed the poetry magazine C’est Selon. To date, three collective books have been published: Cité selon (2006), on the city; La Table des Matières (2007), on eating; and Le Livre de Chevet (2009), on sleeping. The graphic excellence of these books has been recognized with many awards. He also directed, with artist Dana Velan, Nor (2004), an art book on the “ideas of north” of twenty-eight Canadian artists and writers. Canty's 2011 novel Wigrum is the culmination of a web project that began in 1998.

Canty is the director of short films, most recently Antipodes, a brief documentary on painter Rafael Sottolichio, featured on www.whoweare.ca, and two experimental shorts, Méduse and Hôtel de la Mer, portraits of the dreamtimes of an empty cinema and a derelict hotel. In Fall 2013, he will shoot the short fiction Cinéma des Aveugles (Cinema for the Blind).

An occasional commissar, Canty co-founded the Temps Zéro – Mutating Cinemas section at the Festival du Nouveau Cinéma in Montréal. He has been programming the Banff New Media Institute’s Interactive Screen with Susan Kennard for the past three years.

Oana Avasilichioaei is a poet, translator, and editor whose poetry collections include We, Beasts (Wolsak & Wynn, 2012, winner of the Quebec Writers' Federation’s A. M. Klein Prize for Poetry); feria: a poempark (Wolsak & Wynn, 2008); and a poetic collaboration with Erín Moure, Expeditions of a Chimæra (BookThug, 2009). Avasilichioaei has translated poetry from the Romanian of Nichita Stanescu (Occupational Sickness, 2006); the Quebecois French of Louise Cotnoir (The Islands, 2011); and most recently Wigrum, a novel by Daniel Canty. Other recent editing projects include “The Mapping Issue” (co-edited with Kathleen Brown) for Dandelion (Calgary, 2011) and a dossier on poetry in translation from the Quebecois French for Aufgabe (New York, upcoming 2013).